swans-jailer
For a while now the server has been locked as many of you know. I have been working on a huge update for CrewConflictRP where I have taken a look at many perspectives and previous problems and tried to solve them the best way possible. I started with the inventory and craftingmod and the issues related to it, it causes crashing (some scripts might do) but at least one of the worse are gone, and with it goes "mining". One of the biggest challenges on CrewConflictRP was to get something players can spend money on which is useful and would continue to drain the economy instead of just building it up. Before people traded between eachother and mining resources was free or sold by other players, the money just went around. Now in the new update there's a new way to get the permanent guns and its by UNBOXING!

Wipe
Yes the server has been wiped, because this update wouldn't worked with the old economy and the weapons would have to get deleted anyways beacuse of a new inventory script.

Inventory
The new inventory system is finally here and its still "in development" so expect bugs, we have tried to iron out the most gamebreaking once and I can't find anything that would stop us from releasing, but report bugs if you find. So lets talk about this inventory and what it does. Before the permanent guns were obtained through mining and crafting, now its unboxing. There are different crates at different prices depending on the content of the weapons, like pistols are cheaper than assault rifles of course. There's also new tiers:
Why add more tiers? why not, because now you can actually upgrade your weapon! you can right click the weapon and click "ehance" and you will have different outcomes. 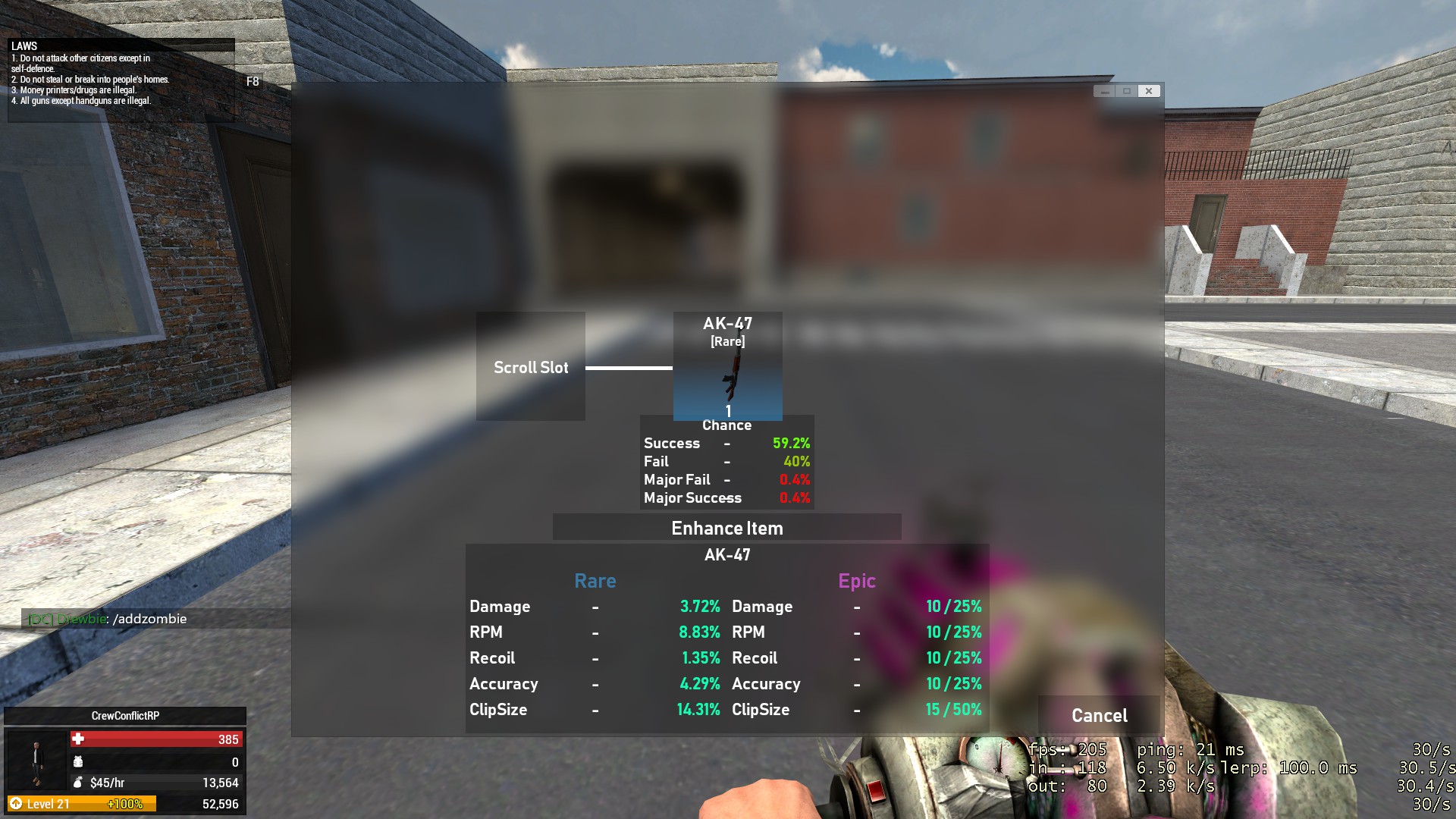 As you can see here you got different chances. Sucess it goes one tier up, major sucess it goes two tiers up, fail it goes eiher a tier down or remains the same can't remember exactly, but major fail destroyes the weapon. This brings me to the next point which is the top tier "glitched". Glitched can only be obtained through unboxing or if you upgrade from celestial to glitched, if your weapon goes only one tier up and lands on god it will never become glitched. You can also socket your weapons with differnet sockets which gives the weapon unique effects, sockets are dropped by crates and cannot be removed. 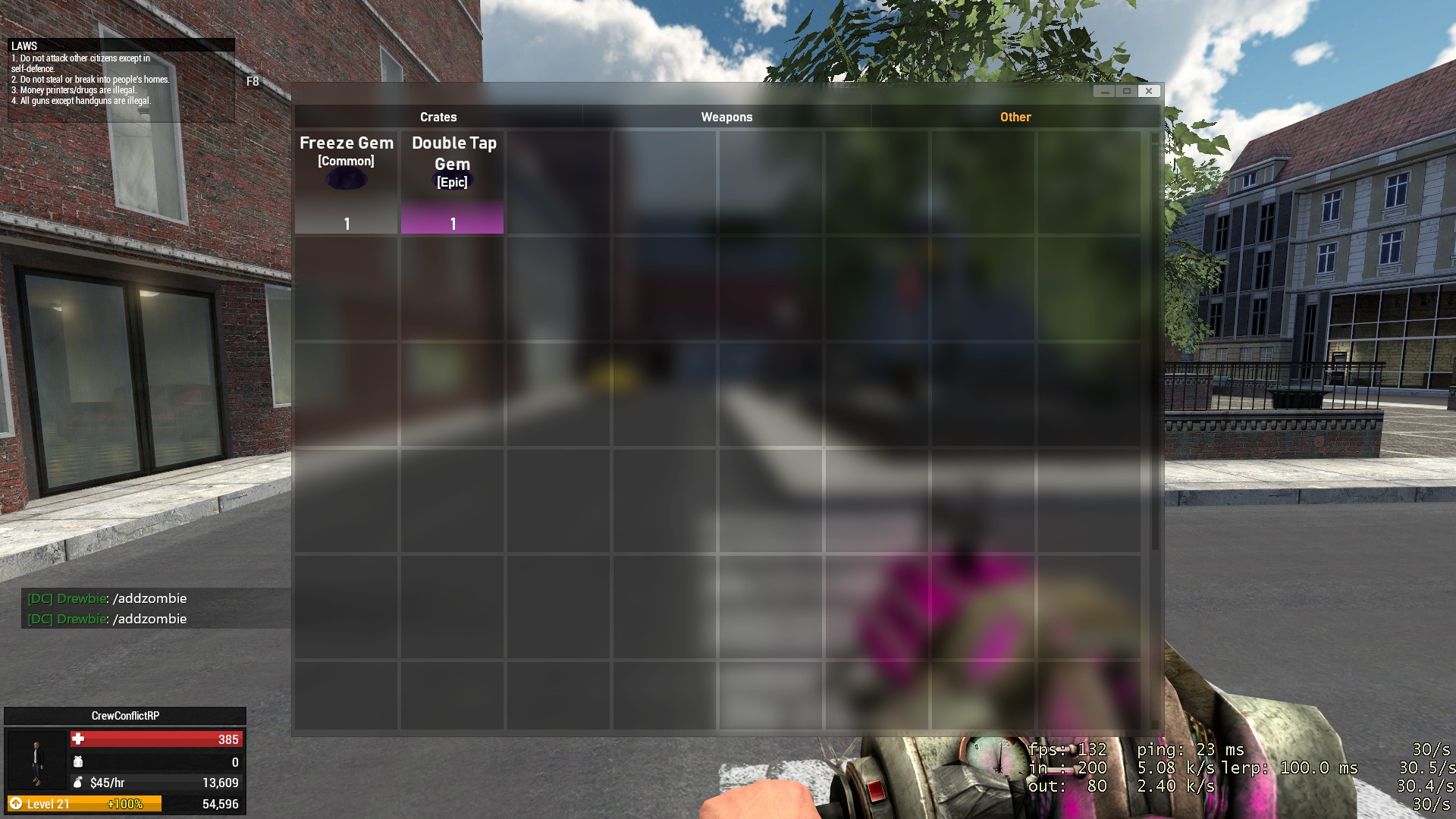 Weapons can also be sold and traded from player to player by dropping it then using commands like:
The price won't shop before you unsecure it. 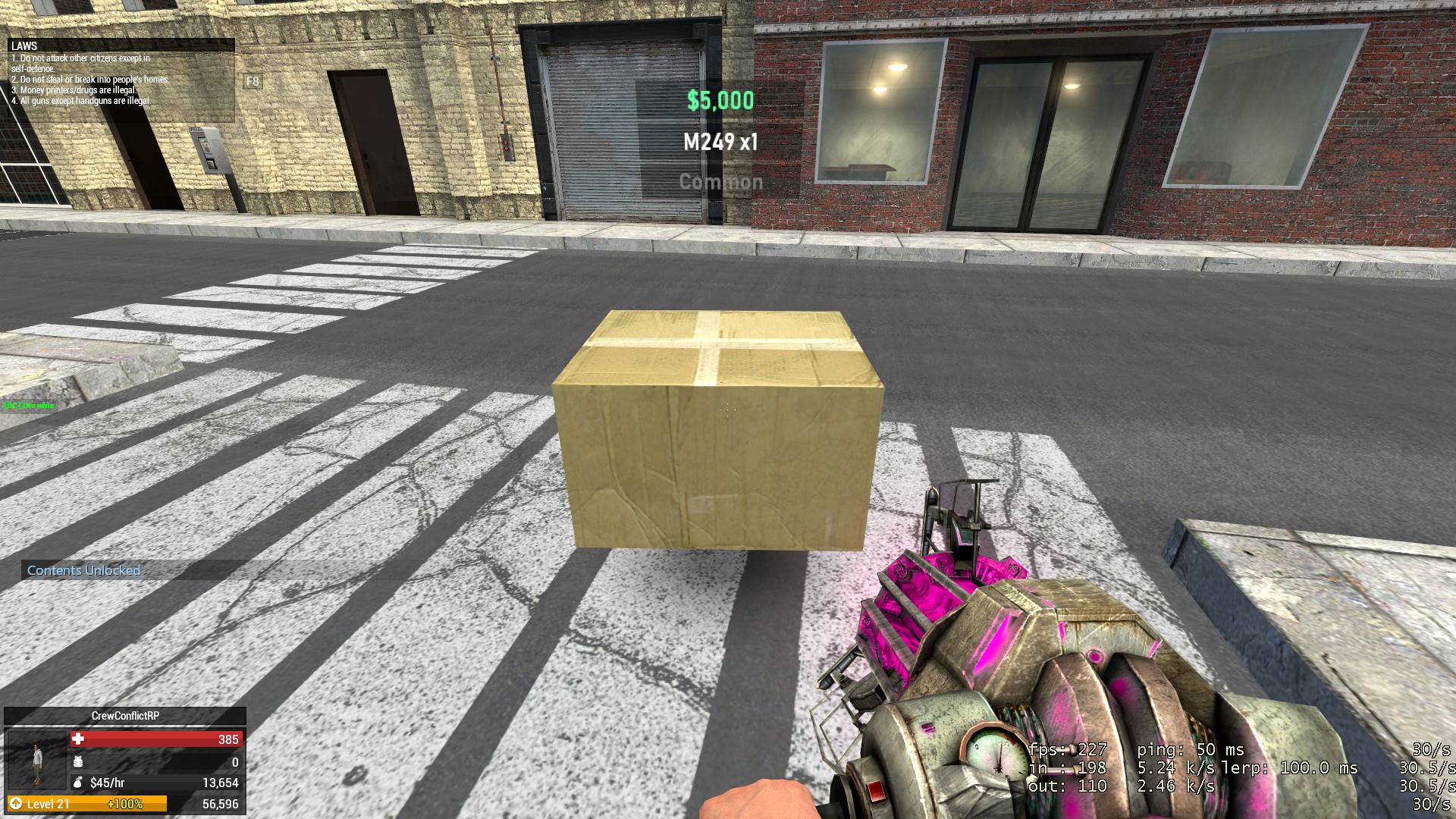 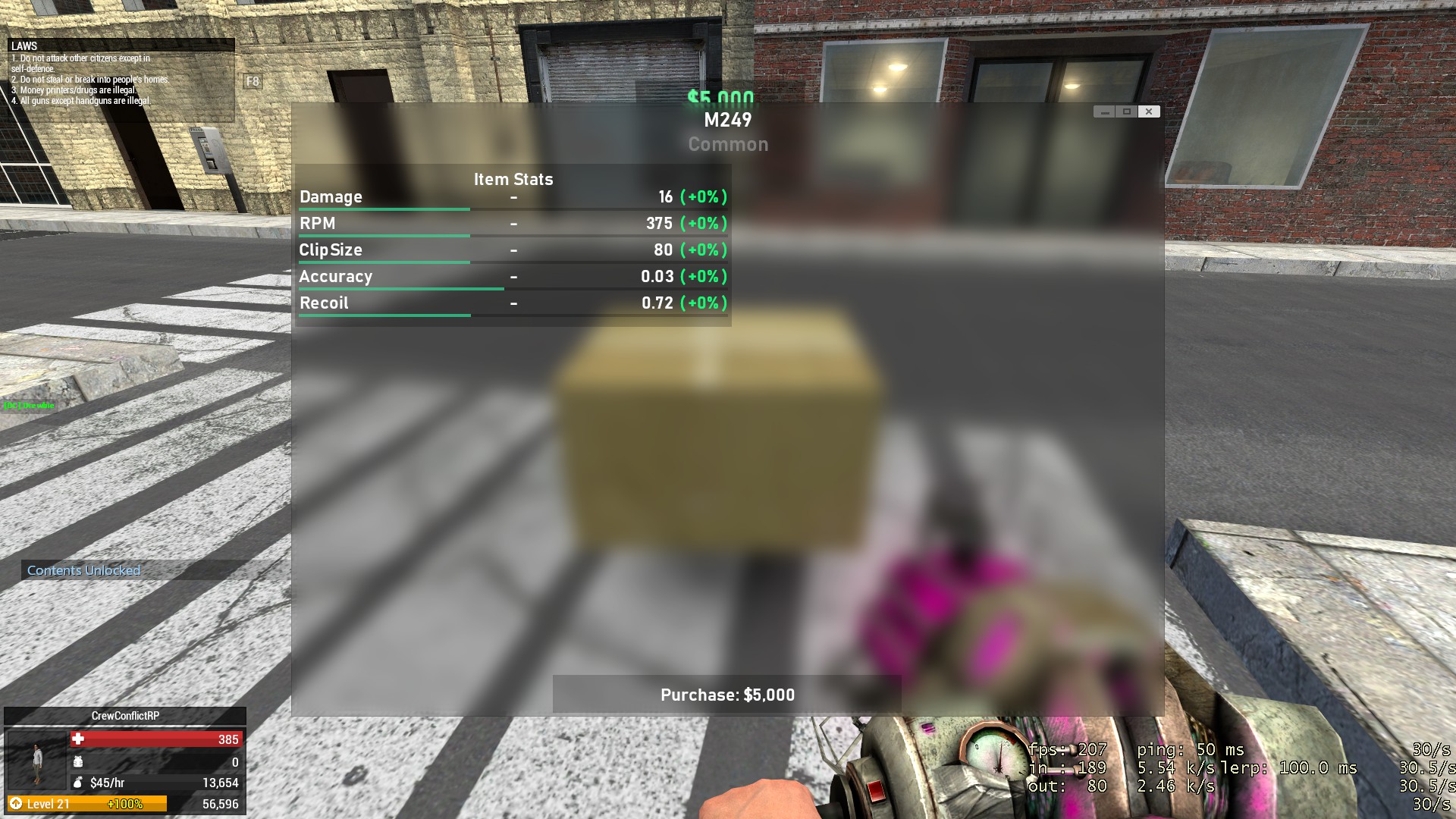 There are many different weapons ranging from the tuned weapons we use to have with attachments to CS:GO weapons where you can put skins on them. To do that type "+zoom" in console.

Economy
The overall economy has been reduced a lot, you no longer gain absurd amounts of money from stuff and its kept to a pretty low number compared to what it was. Why? because its easier to deal with lower amounts of money than millions, the packages on the store has also been balanced.

Level mod
The time it takes to level has been increased by a lot, it was mostly based of money before and now that the economy is lower it takes longer to level up. Why? because we want double XP weekends to matter and not having people hit level 100 so fast and just wait for their money to stack up before prestiging. Prestige money also costs less of course because the economy has been balanced.

Paid ranks
This is important, the gap between a paying player and a non paying player has been reduced. For instance now premium has a 100% XP boost instead of 200, the money printers are also not that far from VIP and VIP is not far from a normal printer. New VIP xp boost is 50%. Why have I done this? beacuse its easier to keep it balanced when they are more equal, of course there are still bonuses to paying, but we also want to keep it fun for everyone.

New heist mod
Now you can actually raid the bank and steal from it, this is a payday bank robbery system called "dHeist" some might have seen it before and I think it will be a lot of fun. You can get masks, drills and bags to carry the cash. The drop off location is down in the sewers.

New admin mod
ServerGuard has been replaced which means everyone lost their rank, but don't worry we will of course give you your rank back. Why was ServerGuard replaced? there is a new very lightweight and basic admin mod which frees a lot of server resource allowing the server to flow better. Because of this I have tried to reduce the server slots a bit and turn up the tickrate of the server so bullets register more accurate.

Daily backups
It will be taken daily backups of the server incase something happeneds so we can just roll back to the day before like glitches or something else.

Other changes
Added new CS:GO grenades and stuff to the black market dealer and cops. Building rules has also been reviewed and there are different rules now so get up to date with it, this will allow for way more building freedom. Balancing might be an issue, but we will take it as it comes. For instance you can base underwater because guns now fires underwater.

FAQs:
How do I open my inventory? still the button i
How do I display the stats on my gun? just left click on it
Workshop collection? https://steamcommunity.com/sharedfiles/filedetails/?id=565807687


Have a good summer ? 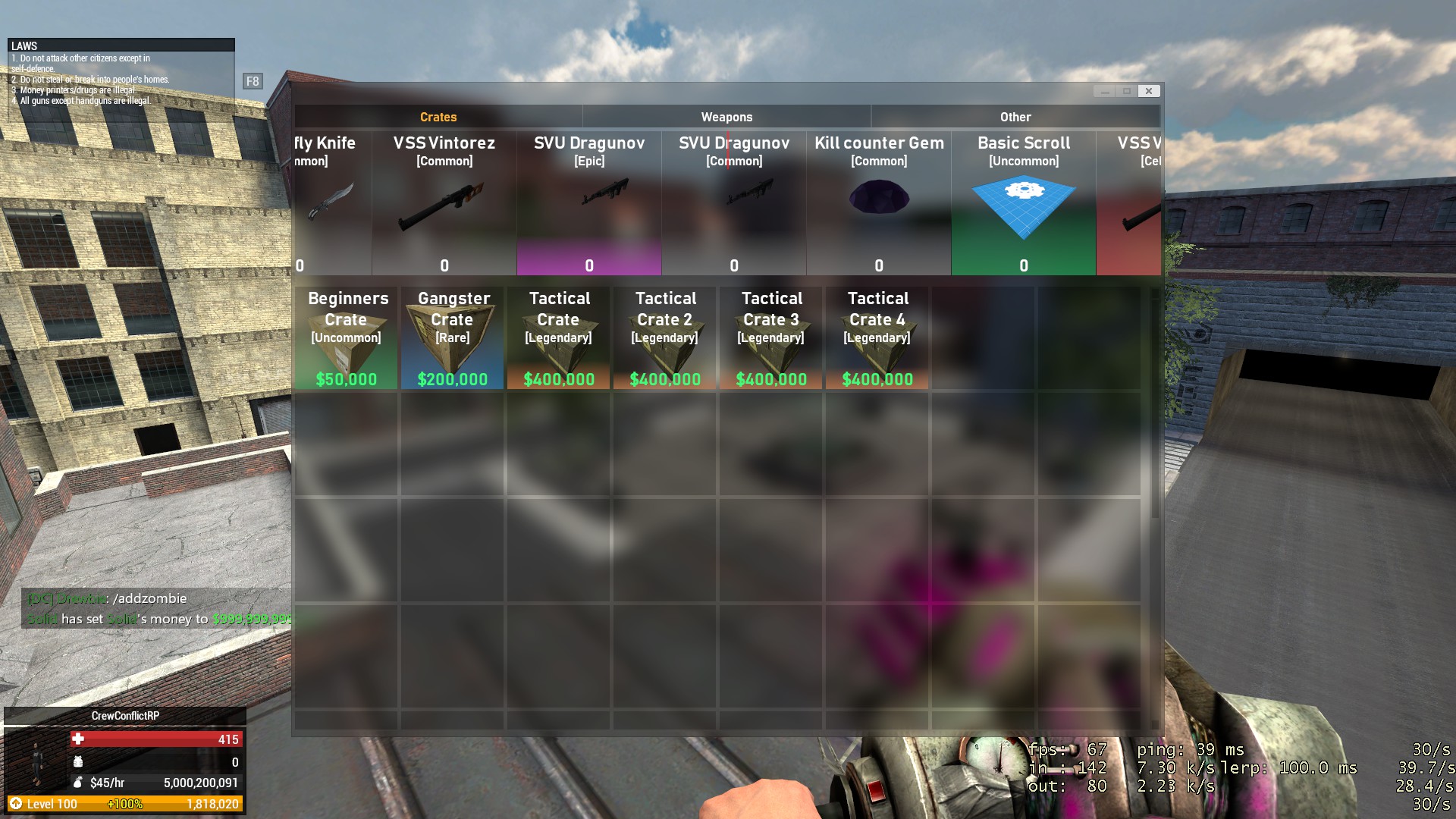 swans-jailer
Drewbie u did it once again, dropping them amazing updates, keep up the good work

swans-jailer
Played for about 5 hours today.

Fantastic update appreciate the effort that went into it by you and staff.